HomeMilford Students Place First in the 2019 “We...

Tears of joy fell from one student’s eyes as her Milford High School won the “We the People: The Citizen and the Constitution” NH State Champions trophy on January 11. The success was the 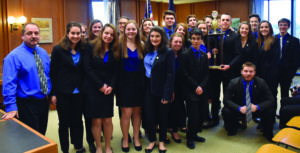 product of many long hours of study in preparation for mock hearings on topics related to the philosophical and historical foundations of the American political system, the framing of the Constitution, and challenges facing American democracy in the 21st century, among others.

Teacher Dave Alcox, who has coached the Milford team to many We the People state championships, expressed his gratitude to the more than 60 students, teachers, and parents assembled for the finals for their dedication to advancing civics education in the state.

Attorney Howard J. Zibel, who has volunteered with the program for more than three decades, also asked for students to stand who were 18 years old and registered to vote, highlighting the importance of democratic participation.

We the People curriculum, a program of the Center for Civic Education, has been taught in New Hampshire schools in grades 4 through 12 for more than 30 years and is a premier Law Related Education