HomeNHBF and Courts to Participate in National...

NHBF and Courts to Participate in National Judicial Outreach Week 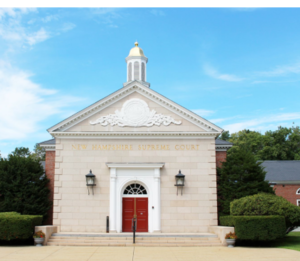 Speaking events will be held through­out the state during which judges and Bar members will meet with the public to dis­cuss the importance of upholding the rule of law in the United States. The programs are an extension of the court system’s commit­ment to equal access to justice and part of an ongoing effort to build public understand­ing and trust in the judicial system. The presentations will include materials from the American Bar Association about the im­portance of maintaining the independence of the judicial system as well as informa­tion specific to New Hampshire’s judicial system and its history. Presentations will conclude with an opportunity for attendees to ask questions of the presenting judge and lawyer.

“I am convinced from my own experi­ence on the bench that the more informa­tion people receive about the courts and the more they hear directly from judges and lawyers, the more they trust the legal system,” says retired Superior Court Judge Richard McNamara, who is a member of the New Hampshire Bar Foundation Board of Directors. McNamara and fellow board member Attorney John Garvey are co-chair­ing the outreach effort.

The first National Judicial Outreach Week took place in 2017 from March 5 to 11 and has been celebrated annually since. The program was developed by the ABA’s Judicial Outreach Network Committee “to encourage judges and lawyers who support a fair and impartial judiciary to engage the community directly.” New Hampshire As­sociate Supreme Court Justice Anna Bar­bara Hantz Marconi is the liaison between the judicial branch and the Foundation for this outreach project.

“All of us in the court system are ex­cited to team up with the Bar Foundation on this important effort to give the pub­lic a firsthand look at our judicial system and how it works for the communities we serve,” Justice Hantz Marconi says.

According to the ABA, “One of the most effective ways to promote public un­derstanding and commitment to our courts is to have more members of the public, es­pecially students and young people, meet more of our active and retired judges out­side the courtroom. [Outreach programs are] the surest way for the public to see the dedication and integrity of America’s judges and their unwavering commitment to fair­ness, impartiality, and the rule of law.”

National Judicial Outreach Week is slowly taking hold in many states across the country. The Massachusetts Trial Court has participated in National Judicial Outreach Week for the last several years, with visits to senior centers and schools. Presenta­tions to schools include information about “potential career pathways in the judicial branch of government,” according to Mas­sachusetts Superior Court Associate Justice Mark Mason. When speaking to criminal justice students at Smith Vocational and Ag­ricultural High School in 2022, Mason said, “Fundamentally, what we all share with you is that we want to help people.”

The Hawaii State Judiciary, which has participated in National Judicial Outreach Week since its inception in 2017, has seen consistent participation from both judges and the public. Upon completion of the 2020 NJOW activities, then Third Circuit District Court Judge Margaret Masunaga said, “National Judicial Outreach Week got me thinking about the rule of law and due process this year, and I was just feeling proud to be an American.”