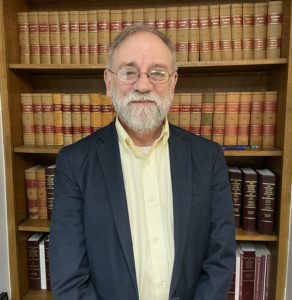 Elliot Berry, set to retire from the only job he’s ever had for 47 years at the end of October.

Elliott Berry, a renowned and stalwart advocate for disadvantaged Granite Staters for close to 50 years, has announced his upcoming retirement on October 31, 2022.

Berry is the managing attorney and director of the Housing Justice Project for the Manchester office of New Hampshire Legal Assistance. Following his graduation from Boston College Law School in 1975, he went straight to work for NHLA. It has been his only job – aside from short-term teaching stints each fall in Beijing, China from 2006 through 2009.

“It was very clear to me that I wanted to do something that could make some social change and benefit lower-income people, so [NHLA] was an ideal job,” Berry says.

One of Berry’s main focuses has been housing for residents of the state with limited means. He has represented thousands of individuals and families facing eviction and/or housing discrimination and has brought a series of cases successfully challenging municipal zoning ordinances that created significant barriers to the construction housing for low-to-moderate-income people. He also essentially wrote the landlord/tenant statute, RSA 540.

“One of the things I’m proud of is the number of people I’ve been able to help, directly and indirectly, avoid being thrown out onto the street,” Berry says.

“He is the state’s preeminent authority on landlord/tenant law, having been involved with the creation of much of the substantive law that exists today,” Greenwald says. “So many people in New Hampshire have Elliott to thank for dramatically impacting their quality of life through the preservation of their housing.”

“He has had an incredibly sweeping and enduring influence on housing laws in our state – and that’s an understatement,” Tobin says. “He’s a brilliant lawyer. Most of the time, the lawyers on the other side end up being very fond of him.”

“He’s the housing guru of New Hampshire,” Gebhart says of Berry. “What’s really annoying is that he quotes the [RSA 540] statute by chapter, verse, and subsection. Not just 540, but the mobile home statute and local welfare statutes, as well. He’s a brilliant man and was certainly the best boss that I ever had. I was very fortunate to get thrown in with him.”

Berry was also the co-founder of the New Hampshire Community Loan Fund, nationally recognized for its manufactured housing loan program.

“I was very involved in legislation that created opportunities for manufactured housing owners to create cooperatives and become the owners of the parks that they live in,” Berry says. “There are now over 120 resident-owned cooperatives in the state.”

Another significant area in which Berry has made a positive impact was the state prison system. In the late 1980s, he became heavily involved in litigation to improve conditions for inmates housed in the men’s state prison, resulting in a comprehensive consent decree in 1990. The case paved the way for later litigation he brought, such as a lawsuit that resulted in the creation of the women’s state prison.

“[Before the lawsuit], women felons did time in county jails, which were totally inadequate for long-term incarceration and had nothing in the way of rehabilitative programs,” Berry says. “We got an order that the State create a prison for women – which was the one in Goffstown – but it was supposed to be temporary. By 2012, nothing had been done, so we filed suit and forced them to create a new facility that had programs and services that were substantially equivalent to what the men had.”

Retired NHLA attorney Alan Linder, who worked with Berry on the inmate cases, says Berry has always been the go-to person at NHLA for all staff and that he is “both a state jewel and a national treasure.”

“He has devoted a good part of his life to helping others,” Linder says. “He has achieved a measure of justice for thousands and thousands of persons. He has done this well and he has done this with humility and a catching sense of humor. It has been an honor and a privilege for me to have been able to work with Elliott and to learn from him.”

Brian Shaughnessy, member of the 603 Legal Aid Board, says he has collaborated with Berry many times and has conversely been on opposite sides in some cases.

“Elliott is a lawyer’s lawyer and a quintessential New Hampshire lawyer,” Shaughnessy, who has collaborated with Berry many times, says. “It is said that in practicing law in New Hampshire, there is a lot of common sense and a lot of civility, and Elliott brings both of those qualities to the table in each and every case. He is the embodiment of the perfect professional.”

When Berry was an undergrad at the University of Michigan, he majored in Far East studies and learned to speak fluent Mandarin. Each year, from 2006 through 2009, he would take time away from NHLA to travel to Beijing, China for short-term teaching positions. These typically lasted for a month or two.

“I jumped at the chance,” Berry says. “The first year, I did a four-week course, which was an introduction to Anglo-American juris prudence, with a lot of constitutional law. It was a blast. [In subsequent visits], I ended up helping them run their moot court program and co-coached their team in their international arbitration competition. The students treated me with such respect, and I made a lot of friends there that I still have to this day. I’m grateful to John Tobin for letting me do that.”

Berry met his wife, retired attorney Campbell Harvey, while she was clerking for the judge on his first inmate conditions lawsuit. They married in 1980 and had two children, Jake and Maggie. In 1981, Harvey started the first all-female law practice, Harvey & Mahoney, and was the author of RSA 173b, the domestic violence statute.

“The pair of them have had an amazing influence on our legal system,” Tobin says. “They both deserve long-term, enduring recognition.”

Berry’s son Jake, who is the Vice President of Policy at New Futures, says a lot of his work is at the State House and his father is mentioned quite a bit.

“Nine out of 10 legislators that I talk to in the halls speak very, very highly of [my father] and the work that he has done,” Jake Berry says. “But that 10th legislator thinks he’s a pain in the butt. I think my dad would take just as much pride in that 10th one, though.”

Stephanie Savard, Director of the NH Coalition to End Homelessness and Chief External Relations Officer at Families in Transition says she was fortunate to work with Berry.

“He is a force to be reckoned with but in a way that is so respectful,” Savard says. “If I could ever be so lucky to have an Elliott Berry speaking up on my behalf – that would be a big win. He damn well deserves a retirement.”

Berry’s decision to retire was not an easy one, but after 47 years of advocating for the disadvantaged, he decided it was time.

“The emotional callouses you have to develop to stay in this work as long as I have, have started to take a toll,” Berry says. “And the toll that the vicarious trauma was taking on my ability to be as empathetic as I would like to be was getting to be enough. When you start becoming insufficiently reactive to terrible stories your clients are telling you, it just told me that it’s time. I don’t want to not be outraged.”

Berry believes that Granite Staters will be left in good hands with the current NHLA staff and says it helps him to rest easy knowing that. And when asked what he would say to a young Elliott Berry just starting out he says the following:

“When I started, I tended to be a bit of a hothead and I was self-righteous – and with somewhat unrealistic ideas about what I could achieve. Having high goals and aspirations is fine but park the self-righteousness and the hotheadedness at the door, because I learned over time how much more you can accomplish when you work hard to understand where the opposing party is coming from. Don’t take it for granted that you are a better person than they are.”