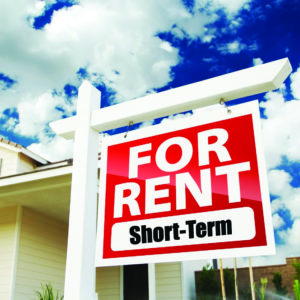 Short-term rentals, aka vacation rentals, have been around in New Hampshire for decades, particularly in our Lakes Region. In the days of yore, before the internet, renters relied upon word of mouth. In 1995, when the web became a household commodity, a company called Vacation Rentals by Owner (VRBO) launched an online listing platform to make things easier. However, it wasn’t until the advent of newer listing platforms with mobile apps like Airbnb, HomeAway, and FlipKey in the 2010s, that made short-term rentals explode in popularity. And with that explosion, came the legal debates.
While there is currently no controlling definition of a short-term rental (STR), it’s generally agreed they are temporary lodgings for less than 30 days, in a building that is otherwise used as a residence. Some of them are owner-occupied for parts of the year and some are not. The largest issues surrounding STRs lie with the non-owner-occupied rentals, particularly with out-of-state investors buying homes and turning them into income properties.
Attorney Cordell Johnston, formerly of the NH Municipal Association (NHMA), refers to these as “Holiday Inns without the signs.”
“If the owner lives there, they have a much stronger interest in keeping problems to a minimum; they don’t want to cause trouble in the neighborhood,” Johnston says. “Whereas, if it’s non-owner-occupied, it’s just an investment; it’s just about making money. I think because of Airbnb and similar platforms, people realized there is money to be made.”
Some concerns raised with these types of STRs are increased crime, trespassing, violations of noise and parking ordinances, and declining maintenance of properties. Most of these arguments boil down to restrictive zoning and how STRs should be classified. Property owners who rent to vacationers argue that STRs are residential, whereas some municipalities and STR opponents see them as commercial.
“The minute you take money for a room, you are a business,” President of the NH Bed and Breakfast Association Heidi Milbrand says. “Airbnb is a scam. They are hurting and undercutting legitimate businesses that have been around for years. A couple years ago, King Sununu was touting that short-term rentals are great, but of course he would say that – his family owns Waterville Valley. They want the money.”
Margaret Byrnes, Executive Director of NH Municipal Association, says there has been a steady flow of legislation relative to STR over the last few years, but there have not actually been any changes to what municipalities can do. She notes that based on data from the Office of Planning and Development, only about 30 out of the 234 municipalities in NH have local regulations for STRs.
“In a lot of ways, it reminds me of Uber,” Byrnes says. “When they started out, they said, ‘no, we are just some people driving other people around in our vehicles and getting some money for it. We are not taxis; we should not be regulated.’”
Byrnes also indicates that STRs can be rented through the hotel chain, Marriott, on their website. A quick search on Homes & Villas by Marriott International does yield listings of vacation rentals in NH. The page boasts, “New homes added every week. Private homes with the assurances of Marriott.”
“The Marriott website has hundreds of short-term rental listings in New Hampshire,” Cordell Johnston says. “But I don’t think they own those. I think it’s just another platform like Airbnb – privately owned properties advertised on the Marriott site.”
NH Senate Bill 249 is the latest in a line of legislative attempts to address the issues around STRs. In short, the bill was designed to prohibit municipalities from adopting ordinances that ban residential single- and two-family buildings from being used as STRs, while enabling them to enact ordinances in multifamily and non-residential structures. As this article was being written, the House voted to interim study the bill.
Bob Quinn, CEO of NH Association of Realtors, was one of the architects behind the bill. He says SB 249 aimed to find a balance between the protection of private property rights with the need of municipalities to ensure the safety and quality of life for their residents and visitors.
“There was a misnomer that was attached to the bill that it eliminated all ability for towns to regulate, but that’s not what the bill said,” Quinn says. “We even had in there that nothing in this paragraph shall limit a municipality’s existing authority to generally regulate parking, noise, safety, health, sanitation, or other related municipal ordinances. All we were saying is that under RSA 674, you can’t ban them [STRs].”
Quinn continues, “we also added new authority so a municipality could require a property owner to register with the town and that if someone – whether the owner or a guest at the house – violated an ordinance two or more times, the town could pull the registration from that property. So, we were looking for a real balance.”
As far as complaints of STRs creating more noise, trash, trespassing, and parking violations, Quinn says, “they [municipalities] already have the ability to go after them [STRs] for those things under RSA 31 and other statutes. Plus, there is no evidence to suggest that short-term rentals are more of a disturbance to the community than long-term rentals. They just say that. In fact, the reality is that most of these houses are kept up better than others in the neighborhood because they want people to rent the house and recommend it to someone else.”
Margaret Byrnes says that NHMA was opposed to SB 249.
“If municipalities want to regulate short-term rentals, they should take steps to clearly do so under their local regulations,” Byrnes says. “What’s not appropriate is a statewide, one-size-fits-all kind of hammer approach to force deregulation or removal of local authority, simply because one industry is looking to not be subject to local ordinances and local processes.”
Another concern that has been raised in connection with the explosion of STRs is an adverse effect on affordable housing. 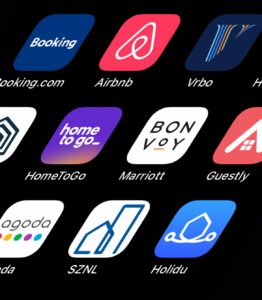 The advent of mobile applications and online platforms have made short-term rentals more accessible and more popular than ever.

“We at NHMA have always seen that to be a logical connection,” Byrnes says. “If investors can buy up single-family homes and use them as profit-generating businesses, that takes those homes off the market to be used as residences. The average person can’t compete with an investor.”
According to a recent article in the Harvard Law and Policy Review called How Airbnb Short-Term Rentals Exacerbate Los Angeles’ Affordable Housing Crisis, the theory is that STRs reduce the affordable housing supply by conversion.
“Any housing unit that was previously occupied by a city resident, but is now listed on Airbnb year-round, is a unit that has been removed from the rental market and has essentially been added to the supply of hotel rooms,” the article reads.
“It’s a bit of a smokescreen,” says Bob Quinn. “That Harvard study was done in Los Angeles where there is a large number of apartments and a large number of short-term rentals. That’s not the situation in New Hampshire. And the study even said that at the end of the day, short-term rentals have a nominal impact.”
Quinn continues, “Where you often hear the greatest municipal concern raised about affordable housing from local officials are from communities that do not approve new housing. If some of these communities wanted and were sincere about making housing more affordable, then they would approve projects for multifamily housing.”
There have been a few recent lawsuits between non-owner-occupied STR operators and townships, wherein the language of zoning ordinance came in to play.
In 2019, the New Hampshire Supreme Court upheld the Superior Court’s decision in Working Stiff Partners, LLC v. City of Portsmouth that “the plaintiff’s use of its property for short-term rental via websites such as Airbnb was not permitted as a principal use in the zoning district in which the property was located, and that the definition of ‘[d]welling unit’ contained in Portsmouth’s zoning ordinance was not unconstitutionally vague as applied to the plaintiff.”
In January 2022, the Carroll County Superior Court ruled in favor of the defendant in Town of Conway v. Scott Kudrick, wherein Conway sought an order declaring that Conway zoning ordinance does not permit STRs in residential districts that are not owner-occupied.
In her opinion, Judge Amy Ignatius said, “the court must apply the terms of the Ordinance as written…and not rely on uncodified interests of the Town as to what new uses should be prohibited. As outlined above, short-term rentals fit within the Conway Ordinance’s definition of residential/dwelling unit and, thus, need not be owner-occupied in residential districts.”
Conway has appealed this decision to the NHSC, and oral arguments begin on November 15, 2022.
Bob Quinn, who filed an amicus brief in the case, says “the Conway ordinance is written in a manner that prohibits short-term rentals in buildings or structures without kitchens. They wrote that many years ago to deal with the roadside cabins. But now the current planning board is trying to shove a square peg in a round hole. I think that is happening to towns across the state and it’s going to lead to a number of lawsuits. The question has gone to a number of state supreme courts and almost all of them have ruled them residential use, which was in our amicus brief.”
Attorney Nathan Fennessy, who was one of the attorneys who represented Scott Kudrick, says that prior to Conway v. Kudrick, there were nearly 200 cease and desist letters sent to short-term renters in Conway’s neighboring town of Madison. However, once Judge Ignatius issued her opinion, Madison dropped all of the cease and desists.
“For 50 plus years, people have been renting ski houses and lake houses, and we didn’t call them short-term rentals. It has only been in the last few years with the advent of technology we have decided they are a bad thing,” Fennessy says. “I’m not sure if towns around Lake Sunapee or Conway would have developed in the same way if visitors only had an option to stay in hotels or motels rather than short-term rentals.”
One thing that some of the parties agree on is that the state may need to step in at some point.
“Towns are going to continue to struggle with it until the state steps in,” Laura Spector-Morgan of Mitchell Municipal Group says. “I’m honestly a little surprised the State hasn’t been more active in stepping in, one way or the other. The legislature seems to not want to take a position on this and it’s resulting in a patchwork of regulations across the state that I think is confusing for a lot of people.”
Bob Quinn echoes the sentiment of the State getting involved.
“We are not 234 nation states; we are the State of New Hampshire. So, the State has a role to play,” Bob Quinn says. “It worked really well with accessory dwelling units. The State said towns can’t prohibit them but gave the towns regulatory authority. That’s the same model we want to use with short-term rentals.”