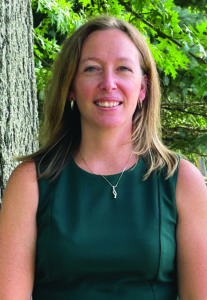 For New Hampshire Superior Court Law Clerk Supervisor Stephani Roundy Knights, limitations are laughable, and marked multitasking is a matter of course. Alliterations aside, Roundy Knights has generally never let obstacles stand in the way of her goals, and even if she doesn’t achieve those goals the way she originally intended, she finds another way. Case in point, she wanted to be two things when she was a child: a lawyer and a dance teacher. And now she is both.

The daughter of Vicki Roundy, the first female partner at Boynton Waldron, and Edward “Kim” Roundy, Vice President and Treasurer of the University of New Hampshire Foundation, Stephani Roundy Knights grew up in Strafford County. She fast-tracked her way through school, skipping the third grade and later finishing her undergraduate at UNH in just three years.

Growing up in her mother’s law office, law school was always on the horizon. Each day after school, she would pretend to be her mother’s little paralegal. In grade school, she even started charging for consultations.

“Stephani’s first-grade teacher thought she was so advanced that she announced to the class that if any students had any questions, their first step was to ask Stephani,” Vicki Roundy says. “She came home frustrated because she spent her whole day answering questions from other students. I told her the teacher is the one getting paid to answer the questions, not her.”

Vicki Roundy continues, “The next day, Stephani came home with a note from the teacher saying that she was collecting quarters from the other students for answering their questions. I just laughed and told her, ‘Your rates are too low, Stephani,’ but I don’t think that’s what the teacher wanted me to say.”

Roundy Knights kept busy throughout her youth, playing field hockey, ice hockey, and taking dance lessons. She loved dance so much that she became determined to pursue the career of a dance instructor.

“My mom tried not to squash that dream,” Roundy Knights says. “But suggested I continue with my plan of going to law school, so I’d have a law degree to fall back on if that dance teacher idea didn’t pan out.”

After earning her undergraduate degree from UNH in 2005, she began law school at George Washington University in Washington, DC. Aspirations of becoming a dance teacher were in the rearview mirror, for now.

In the summer of her first year, she got her first taste of clerking as a summer intern at the Rockingham County Superior Court.

“I’ll never forget when they handed me a giant box of old maps and said, ‘figure out where the lot line is,’” Roundy Knights says. “And yet I came back for more.”

And she kept going back to the Superior Court throughout her career – twice.

During her second summer in law school, she interned at the New Hampshire Public Defender, but when she graduated law school in 2008, she returned to the Superior Court for a second time, working as a term law clerk.

Once her two-year term was over, she entered private practice at Roundy Law Offices with her mother and her brother, Attorney Christopher Roundy. Although she practiced at the family firm for six years, she still missed some aspects of clerking.

“I loved the work we were doing [at Roundy Law Offices], serving often lower-income people, but there was that legal analysis puzzle piece that was missing,” Roundy Knights says. “[worker’s compensation and personal injury] are fact-driven and don’t really lend themselves to a lot of analysis of the law. I had no plans to go anywhere, but if the right opportunity came up, I would be interested in flexing more of those legal analysis muscles.”

Opportunity knocked in 2016, when Superior Court Judge Diane Nicolosi sent Roundy Knights a job posting for the somewhat new position of Law Clerk Supervisor which was created a couple of years prior. There was just one problem: she was very pregnant.

When Roundy Knights submitted her application, she made no mention of being almost 38 weeks pregnant, as she wasn’t sure how that would factor. Two days before her interview was scheduled, her doctor induced labor.

“As soon as we arrived on Monday to be induced, I said ‘now listen, the first priority is health of the baby and second is my health, but the third priority is efficiency because I have somewhere to be,’” Roundy Knights says.

Every time the nurses changed shifts; she would remind them that the paperwork better not hold her up when it was time to leave. Two days after giving birth, she made it to the interview.

“Edward turned 48 hours old during my interview,” Roundy Knights recalls. “That’s how badly I wanted the job. I knew how much I loved clerking and pulled out all the stops to get back.”

And so began her return to the Superior Court for the third time.

“I recall learning of her coming in for an interview within days of giving birth and thinking she must be superhuman. I was right. She is,” Senior Superior Court Justice Marguerite Wageling says. “[She] is also by far one of the most intelligent and hard working of the outstanding law clerks who have worked for the Superior Court. The New Hampshire Judicial Branch is lucky to have her in its employ.”

As Law Clerk Supervisor, Roundy Knights manages and doles out the workloads of 14 law clerks that are assigned to each of the 11 Superior Courts in New Hampshire.

“She has an incredibly difficult position and manages it superbly,” Superior Court Judge Martin Honigberg says. “She does an amazing job of dealing with multiple constituencies. She works with more than 20 Superior Court judges, all of whom are different, as well as all the law clerks – who all come into the process knowing very little about what to expect – and she turns them into a functioning team of clerks.”

In addition to supervising the law clerks across the state, Roundy Knights clerks for Superior Court judges out of her Rockingham County Superior Court office.

“She has a 60 to 70 percent caseload in addition to managing all the law clerks,” Wisconsin Supreme Court law clerk Doug Bruno says. Bruno worked as a law clerk under Roundy Knights in New Hampshire from 2020 to 2022.  “I have no idea how she does it. She really is a modern-day Hercules. She is the glue that holds the Superior Court together.”

About 10 years ago, Roundy Knights began taking Zumba classes at her local YMCA – an activity that would eventually lead to her fulfilling her second childhood aspiration. After Roundy Knights filled in for her favorite instructor a few times, she was encouraged to get her instructor’s license.

“Zumba is great for my physical and mental health,” Roundy Knights says. “It’s so different from the legal job and a different side of my personality. It checks a lot of boxes at once and now that I’m teaching it, I get to give that to other people.”

She says that some of her classmates used to lightheartedly tease her and call her “extra” for using two-pound hand weights while she dances.

“I’ll never be someone who goes to the gym to lift weights,” she says. “So, with the hand weights, I can get some toning in while I dance. I’m a big multitasker. Even when I’m driving. If it’s more than 15 minutes, I’m listening to Zumba music and choreographing. Please don’t see me car-dancing; it’s embarrassing.”

Of accomplishing her goal of finally becoming a dance teacher like she intended as a child, Roundy Knights says, “I always say, know your limitations and work around them – or within them –

depending on the circumstances. You can often get where you want to go, if perhaps in a different way than you might have originally envisioned.” 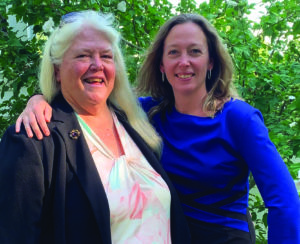 Stephani Roundy Knights and her mother, Vicki Roundy, who was the first female partner at Boynton Waldron before starting her own firm, Roundy Law Offices. Roundy Knights used to play in her mother’s office and pretend to be her little paralegal. Courtesy Photo. 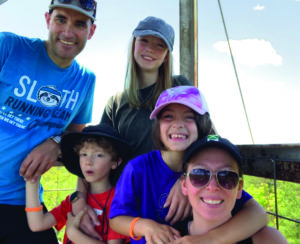 She attributes this outlook to the strong mentors that she has had throughout her life and career, including her mother and father, as well as the Superior Court judges that she works with or has worked with in her previous stints as a law clerk. An entirely separate article could be filled with the wonderful things she has to say about the judges she has worked with and how they have all made such a positive impact on her life.

In one instance, she talks about how Superior Court Chief Justice Tina Nadeau inspired her.

Several years ago, during a few days of non-stop rain, Nadeau’s way to work was blocked by flooding from the river near her home. Instead of calling out of work, Nadeau kayaked down the river to higher ground, where someone from the court picked her up.

“That has always stayed with me because it demonstrates such a commitment, the attitude that this is not an unsolvable problem – let’s think outside the box and get it done,” Roundy Knights says. “It’s a very similar mentality that my mother has instilled in me. I like to think I’ve incorporated that into my outlook.”

Roundy Knights continues, “Everyone has challenges in life and there are some things that no matter how hard you try, it’s just not in the cards for you. But there are a lot of things I have found that if you look at them a different way or take a different path, sometimes you can get there in another way you didn’t think you would. Like kayaking to work.”

In July 2022, Roundy Knights celebrated her 15th wedding anniversary with her husband, Mark Knights, a partner at Nixon Peabody, LLP. She met Knights online while in undergrad at UNH, “before meeting online was cool.” Together, they have three children, Sophie, Evelyn, and Edward. When she’s not working or teaching Zumba, she spends her time coaching field hockey or hiking and skiing with the whole family.

“My family is very invested in skiing. Mark is a snowboarder, but I married him anyway,” Roundy Knights says jokingly.

Interestingly, Roundy Knights’ family consists of several lawyers. Not only are she, her husband Mark, and her mother Vicki lawyers, but her brother Christopher Roundy, his wife Jaime Gillis, and their daughter Sydney Gillis are, as well.

Roundy Knights recalls observing a recent swearing-in ceremony for the New Hampshire Bar wherein a joke was made about how family who supported the new admittees through law school could now seek some recompense in the form of free legal advice.

She says requests for legal advice within her family rarely occur since most of them have legal training. Rather, her brother Nick, who is a software engineer, and his wife Jess, a family nurse practitioner, get all the requests for help at family gatherings.

“The truth is that being in a family full of lawyers rarely impacts our day-to-day interactions,” Roundy Knights says. “Maybe that’s because we each devote so many work hours to analyzing complex legal issues. Or maybe we just don’t want to run the risk of getting into dinnertime disagreements about the law with people who are also trained to argue for a living.”